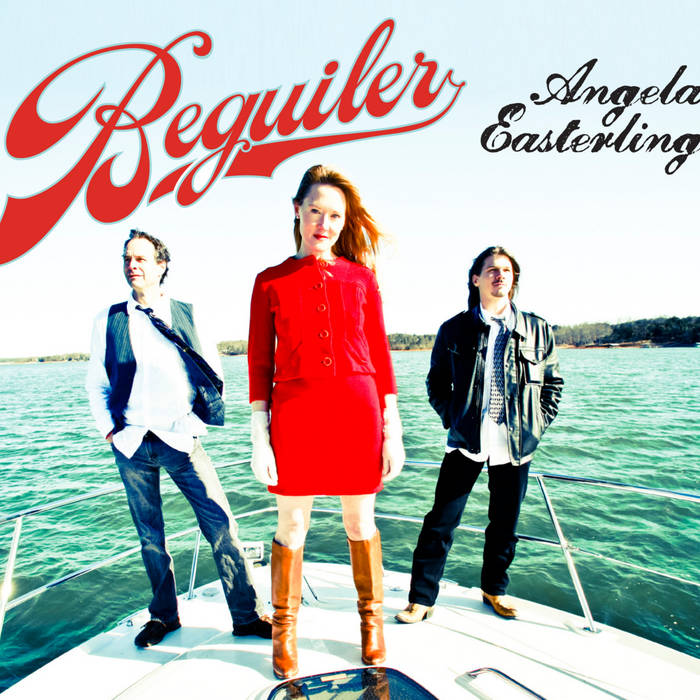 "Angela Easterling has the fire in her belly. With songs inspired by Alice Sebold's The Lovely Bones and A.P. Carter's bones, power, corruption, sex, lies, videotape, French microphones, epic floods and plain old human heartache, Angela is creating literate, modern Southern music for the ages." Will Kimbrough, May 2011
"This singer-songwriter's latest, Beguiler ranks as her best effort to date. Some of her original songs have an epic scope while others are tiny, elegantly illuminated vignettes. Her disarmingly non-histrionic soprano heighten's her performances emotional impact while Brandon Turner's guitar provides some extra dollops of electric energy to the mix." Steven Stone, Vintage Guitar
"Those who know Ms. Easterling will tell you she's the genuine article, just as real and honest as you're going to find behind a microphone these days. So what's an honest girl doing singing about all these lies? Telling the truth about them, of course, in a voice that is strong and clear, backed by The Beguilers, who are Brandon Turner (guitar) and Jeff Hook (drums). Will Kimbrough, who produced the record, also plays on it along with Byron House (bass) and Fats Kaplin (fiddle, accordion, pedal steel). Mr. Kimbrough has taken this very strong cast of players and found just the right combination of instruments for each song, resulting in the impression that each song is recorded just as it should be, nothing missing and nothing extra." Mando Lines, No Depression
"Easterling is at her best when she sheds her pop charms to explore more sinister subjects and tap into country roots. The percussive ode “Manifest Destiny” is an easy nod to Carrie Rodriguez or Alison Krauss with its bleak, piercing fiddles and Easterling’s spotless vocals – which emulate those of Krauss – as she sings of the inevitability of land theft and development. Easterling takes Beguiler into deep water as she sings about infidelity, morality and urban sprawl, and she won’t write a breakup song without wheedling out the most complex aspects. McGuinn describes Easterling’s sound as “tradition meets youthful exuberance,” but it’s more than just tradition; snappy youth is why Beguiler sparkles. But wizened lyrical depth is what could make it last. " Jessica Pace, American Songwriter
"Innocence and clarity so fresh as to be dangerous. The strongest track is “Maria, My Friend” – which tells a sad tale of lost friendship and proves a lovely vehicle for Easterling’s surprising vocal range, with sparse guitar/mandolin/accordion backdrop. All in all, a whole lot of record covering a great deal of musical ground in under 50-minutes. As a result, it’s difficult to put a finger on where Easterling’s planning on going next, but the detours taken here do a fine job of leaving the decision squarely up to her. She’s certainly got the voice to pull it off." Eric Thom, Maverick
“Angela Easterling has a golden glowing voice and she writes observant songs about contemporary life. She can weave urban sprawl and cultural shifts into songs as gingerly as love and relationships. She’s taken her very promising career to a new level with her new album Beguiler, and we expect to be beguiled.” Craig Havighurst, Music City Roots

"Easterling’s new Will Kimbrough-produced Beguiler introduces her snappy new band the Beguilers with a — well, beguiling set of catchy, country-rocking songs that stick in your mind." Jon Weisberger, Nashville Scene
"A Married Man" –top pick on CMT.com Summer 2011 recap blog
"On her own, Angela Easterling is an outstanding singer-songwriter whose music is deeply entrenched in country, folk and Americana. But with her highly skilled band, The Beguilers, Easterling is transformed into a full-fledged rock 'n' roll force. That's not to say her roots influences aren't still evident; it's just that there's more of a high-octane edge to the proceedings. Think Lucinda Williams to get an idea of the musical intensity of Easterling's full band performances." Dan Armonaitis, Spartanburg Herald-Journal
"Easterling's smart tunes and spunky delivery put her in a category with Americana songbirds such as Tift Merritt and Shelby Lynne." Sam McDonald, DailyPress.com
“This is a special act to hit town. Her recent album, Beguiler has a unique blend of grassy-folk and just enough pop to keep ya singing along. Her voice is angelic and her band truly enhances this along with each song’s story. Don’t miss this one, folks.” Fredericksburg, VA patch
"Beguiler is a diverse and spirited re-imagination of the classic country-rock of the early 1970s, the best of which effortlessly blends folk, pop, country, and folk behind the singularly beautiful, lilting vocals and ever-sharpening songwriting prowess of a budding talent." Kyle Petersen, Free Times
"This is Easterling’s first recording with her band, “The Beguilers,” and it’s clear listening to the sample track “Two Clouds” that she’s taking full advantage of the new musical resources she’s been given. The song starts off with guitarist Brandon Turner exhibiting some Steve Cropper style, Blues Brothers-esque ascending notes alongside a soaring organ line, then Easterling’s commanding voice and drummer Jeff Hook’s driving beat propel the song into what becomes a country-tinged summer romp of a track." Cameron Powell, SceneSC
"Angela Easterling is on the road with a new CD–Beguiler, produced by Nashville superstar Will Kimbrough, also features the handy work of Brandon Turner. She’s been hitting the circuit several years now, known for her intense performance of “Helpless” at the 2009 Americana Music Festival I know you’re feeling a little Americana void in your life right now, here’s some medicine." Nashville For Free blog
"Easterling – accompanied by her backing band, The Beguilers – played to a packed house, delivering a fantastic performance. The result was pure musical magic. It wasn’t a show as much as it was an event with some special guests adding to the electric on-stage atmosphere. The Beguilers are always top-notch musicians, but their collective talent seemed to reach extraordinary heights Saturday" Live show review by Dan Armonaitis, Spartanburg Herald-Journal