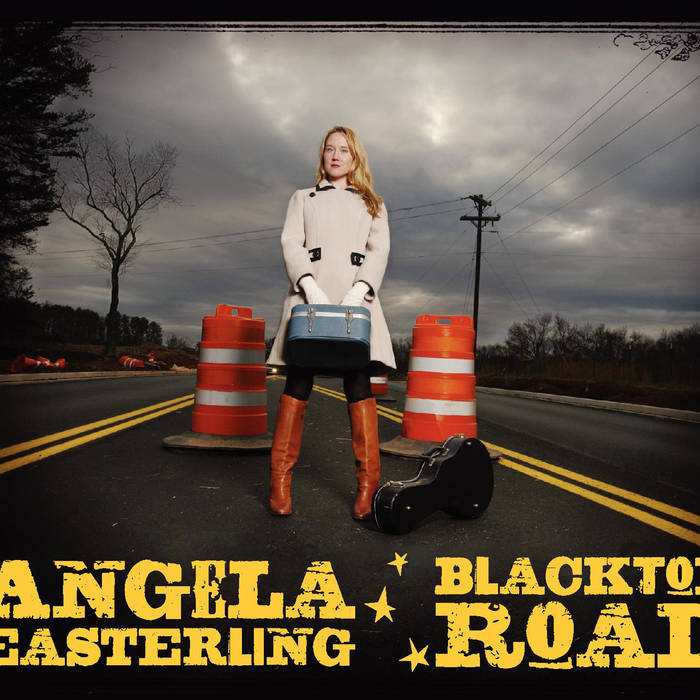 Don Soper Black Top Road sounds like an event in your life, not just a song you wrote. The first time I listened to it I did not buy, later while making dinner I realized I was Singing "Black Top Road". My uncles dairy farm was taken by "eminent domain" but the housing development is named after the dairy farm! Go figure? Favorite track: BlackTop Road.

“Angela Easterling, we now know, is a quietly plaintive singer who rewards attentive listening. Her Blacktop Road, with its mandolins, dobros, lap steels, peddle steels, fiddles, etc., is out-and-out "alt. country,"A lot of the songs here sound like they've been around for years—that's a compliment—including the sweetly yearning cover of a certain Wannabe Southern Man's "Helpless." Oxford American, Editors Picks for June 2009
"Best Political Country Song" - Angela Easterling - "The Picture"- Daniel Gewertz, Boston Herald, Best of 2009 Music (December 11, 2009)
"If Steve Earle was reborn as a girl, he’d very likely be Angela Easterling. And Blacktop Road is her Guitar Town . She comes surging out of the chute like a spurred bronco, full of sideways kicks, bucking with all the compressed energy of a coiled steel spring." - Steven Stone, Vintage Guitar Magazine (Oct .09 issue)
"Dynamite honky-tonk singer Angela Easterling brings a tough traditionalist sound to ballads and ravers alike on her fine new CD Black Top Road." - Philadelphia Inquirer (Jun 21, 2009)
“Our fair newcomer tonight was Angela Easterling, who brought along her new album’s producer, the great Will Kimbrough for a trio set that showed off her grace and songwriting prowess. She’s a folk singer at heart, but the title track of her current album was a rocking portrait of her family farm’s battles with the encroachment of shopping malls and other sorts of “progress.” BlackTop Road bears all the hallmarks of a smart songwriter with a sharp eye for both the past and future.” –Craig Havighurst, Music City Roots (Nov. 18, 2009)

"BlackTop Road is soaked in an intelligence and far-reaching historical sense that makes you suspect its origins couldn’t be entirely human, or at least that all of these songs and performances couldn’t have emanated from one young woman...the clarity and consistency of the narrative voice make (you) feel like you’re learning quite a bit about Angela Easterling. Above all else, the thing you’ll learn is that, regardless of what may come her way, she’ll be fine. There’s no stopping a talent of this magnitude." -C.M. Wilcox, Country California (Oct. 1, 2009)
"This is a road trip worth taking... BlackTop Road should be the perfect companion piece to Steve Earle’s Copperhead Road. On her personal protest song, an angry Easterling verbally kicks ass as some South Carolina land in her family since the late 18th century is being grabbed by the state for development. The song and the singer seem destined for a spot in Farm Aid." - Michael Bialas, blogcritics.org (8-3-09)
"If “Earning Her Wings” announced Easterling’s arrival, “BlackTop Road” shows that she’s here to stay. Easterling handles soul-searching topics fearlessly and gracefully, weaving stories that entrance as much by her warm, inviting voice as by her heartfelt lyrics." - Craig Ostroff, Montgomery News (Jun 25, 2009)
“The "back to roots" attitude that Easterling brings to her fine new project transcends any casual lipservice. Fiddles and banjos trade space with slide guitar and some charged honkytonk rhythms for an album that has one foot firmly planted in the traditional southern music, the other in the modern interpretations of Americana. It's a balancing act that blossoms on track such as the wistful slow-dance ballad "Just Like Flying", charming French twanger "Un Microphone" and jukebox raver title track. Recommended.” - DirectCurrentMusic.com (Jun 29, 2009)
“There's an old head on young shoulders in her writing and she shows that underneath there's a burning ambition to not be good, but to be great…there's a personal honesty and splash of life that jumps out at you. These songs are about place, about family, about belonging and in opposition as much about rebellion, not fitting in, leaving and growth.” -Andrew Williams, Americana UK (September 8, 2009)
"Nashville's overripe with young female singers who want to be the next Taylor Swift, or the next Gretchen Wilson. Thanks, but no thanks. Then you have singers like Angela Easterling, whose music doesn't kowtow to commerce - the songs on BlackTop Road focus on her sparkling, honey-hewn voice, etched with traces of sorrow and hopefulness in equal measure. Produced the estimable Will Kimbrough, the CD is pure, mountain-air acoustic country music. Let's put it this way: Think Emmylou Harris, Alison Krauss or even Gillian Welch. Very sweet stuff indeed. Highly recommended." -Bill DeYoung, Connect Savannah (November 3, 2009)
"Borrowing Will Kimbrough from Todd Snider’s band to produce and play on Blacktop Road was a stroke of genius for Angela Easterling. Kimbrough surrounds Easterling’s gutsy vocals with some whip-crackingly smart country power-pop... A pretty voice and poignant songwriter surrounds herself with A-list players and puts out a great alt-country album." Kevin Oliver, Free Times Favorite CD's of 2009 (January 7, 2010)
"If you want an excellent example of what Americana that 5 layer dip of genres has to offer you need to put on Easterling’s Blacktop Road. For all braying about social messages in contemporary country music they are like crayon scribbling compared to finely crafted song like “The Picture”.- Twangnation.com (Jun 22, 2009)